Over the years I have had a lot to be thankful for: meeting my husband, receiving and celebrating my sacraments, my family, friends, and dogs, my mom being healed from cancer, working with many wonderful children, my education, my health, and my home, but here was one thing missing that I desired so dearly, and that was to have a child that I could raise to know, love and serve God.

For nine years of our marriage my husband and I hoped to be blessed with a child. There were times that it was extremely painful. When people would ask questions about why we didn’t have children or when we were going to, I would always say that God hadn’t given us with one yet and it would be in His time.  Mother’s Day would be particularly difficult for me as I would wonder if there was some reason God hadn’t found me worthy to be a mother. At other times people would urge us to take action and seek medical assistance. It was tempting, as I wondered if God was waiting for me to do something more. We did see one specialist who told us we would never have a child naturally.  I had a hard time accepting this as I knew my husband and I were healthy and that if God willed it, it would only take one tiny sperm and egg to make this miracle happen. As I continued to get older each year doubt crept in. It was in these weak times I had to lean especially hard on my faith. Because nothing is impossible for God, I knew that if He wanted us to have a child we would and I had to trust that in the end He knew what was best for us.

During these times I found comfort in the scripture stories of Leah, Rachel, and Sarah, the intercession of the Saints, and in the many, many prayers of family, friends, students and parishioners. So many acts of kindness contributed to this miracle. Friends brought me sand from Chimayo, prayer booklets from Our Lady of La Leche, traditional food & drinks from a variety of places, wrote my name on intention lists at various shrines, and brought the Infant Jesus of Prague to my home on three separate occasions.

During 2010 my husband was deployed to Iraq after just having been deployed for a year to Kosovo. I was feeling frustrated and helpless that our chances of trying for a child were fading away. I happened to sign up for Facebook at my husband’s urging so we could communicate easier and the first person to pop up was Marianne, whom I had attended graduate school with, but had not talked to in quite some time. She was my first friend and not long after contacted me about the Creighton Method. I was unsure about staring it since my husband would be away for so long, but she convinced me that we could use the time he was away to analyze my cycle and pinpoint any issues my body was experiencing. We started and my husband came home for his two week RnR based on my charting.

After nine years of longing and trying, I had finally come to a sense of peace that my life could be full working with children as a teacher and mentor. The day before he was to leave to go back to Iraq my husband and I discussed how we would make our lives full in other ways and just leave it in God’s hands if he wanted us to have a child.  The very next day after this conversation I found out I was pregnant. 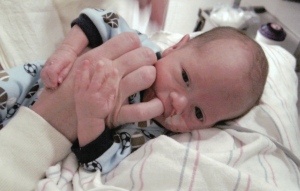 I had a smooth pregnancy until Ari came six weeks early. During this time God continued to guide and protect us medically and financially, and made it possible for Armando to be present for his birth. He was born 3 lbs 9 ozs.  Today he is running & climbing and almost completely caught up with his age group. The Creighton Method was the final piece of the puzzle we had been searching for and I truly believe it was instrumental in our success to finally conceive a child. I thank God for putting the people in my life who were able to help us get here. If all the difficulty and heartache that led up to this moment allows me to stand here and witness to the awesome power of God, then I feel blessed to have had this miracle worked through me.

Since writing my Top 10 Reasons Why I Became a Creighton Model FertiltyCare Practitioner in November 2012, I have a few life updates for you all:

LESSONS: Each client appointment gives me an opportunity to reflect on my attitudes about my marriage, my children, and my faith. There have been many nights when I would come home apologetic after realizing that I hadn’t been as appreciative as I should be for the blessings I’ve been given. I’ve met couples on the brink of divorce…couples who struggle with infertility or repetitive miscarriages…women who face complex reproductive issues. And with each situation, I recall moments of my past when I felt insecure and fearful in the midst of painful circumstances as well. After almost five years of teaching CrMS, there have been multiple times when my clients would mirror back to me areas in my heart that needed healing and purifying. I cannot be more grateful for the older couples freely sharing parenting advice, clients who do marriage mentoring generously passing on amazing resources, and those who have fervently prayed for me and my family. Every person God has brought into my life through this work has become a part of me, and I would not be the same without the lessons each of them has shared with me. One of my favorite follow-up appointments happened some time ago when I met with our beloved Denise and Ben. They encouraged me to dive head first into strengthening the ever-so-important SPICE component at last May’s Practitioner Refresher Workshop because according to them, it is the #1 reason that they are still married. “Don’t doubt yourself, Marianne,” Ben said to me boldly. “You were made to do this!” And off to Three Rivers I went…

BABIES: As pregnancies were achieved among my clients, we also decided to be open to having Creighton Baby Dyogi #4. This is Jean Paul Pierre born on October 4, 2013 (the feast of St. Francis of Assisi)…

When we found out I was pregnant, Gary and I decided that it would be a good time for us to make the switch where he would go back to work and I would be home with the kids. As much as I wanted it since Meleana was born in 2007, I faced a tough transition. All of a sudden I had to take my three little ones to all my prenatal check-ups and frequent fetal stress tests while picking up where Gary left off with homeschooling and domestic duties. Not to mention that I was still working part-time as a CrMS practitioner. Crazy, I know…I think I cried more than the kids did…but by the grace of God we got through it! With tons of treasured memories and a spiritual storehouse of Holy Spirit fruit springing forth from constant self-denial and humility, I wouldn’t trade the experience for anything on this planet.

GROWTH: It has been about two weeks since we made the decision that Stella Maris FCS would offer full-time FertilityCare Services in both English and Spanish. Last November 2013, two of my clients went to EPI in Three Rivers to be trained as practitioners! One of them, Arianna Banuelos, is bilingual and a parishioner at St. Peter Chanel. She has joined me at Stella Maris FCS as a practitioner intern and is in the process of finishing her program with our educator Margaret Howard.

Arianna is undoubtedly a walking CrMS billboard. We always laugh about how she referred several clients to Stella Maris FCS before she even met me! I truly enjoy working with Arianna because she is dedicated, hard-working, and a strong prayer warrior. We are excited to see what God has planned for our Center this coming year! There also have been major stirrings in the Diocese of Orange for NFP promotion, thanks to efforts spearheaded by Fr. Alphonsus Hermes, O. Praem. and Fr. Benedict Yang. We are working with our sister practitioners Sarah Rooney and Alyson del Hierro to serve couples alongside Dr. Mary Kotob, a recently trained CrMS Medical Consultant and head of the Catholic Medical Association OC Chapter. Please pray for this endeavor, as we do have our work cut out for us. There is much to do and an overwhelming number of women out there who need to have this valuable information about their bodies. We are asking The Lord to send laborers for the harvest, so if you are reading this and want to be part of this revolutionary movement in women’s health…send me a message and jump on board! Stay posted…there’s lots more to come!